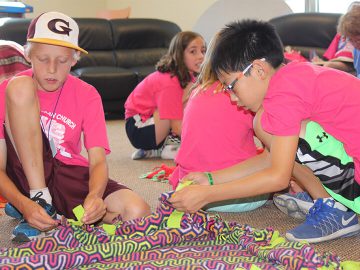 God Sees and Knows Me

I remember my grandmother saying the little poem to me, “There was a little girl, who had a little curl, right in the middle of her forehead. When she was good, she was very, very good…but when she was bad, she was horrid!” As a little girl, I must have been a challenge! At least, that was my interpretation of her message throughout my childhood.

Being the eldest child and grandchild, it was drilled into me that I was the one to set the example for the younger family members. And, where other first-borns might have pushed hard against that, I acquiesced and played the part of the “good girl” pretty much without fail through my growing up years. The problem with that was I learned not to be open or vulnerable. And, over a period of time, I learned to say the “right thing” instead of what I really felt.

Because I often heard I needed to be good so my actions wouldn’t reflect negatively on my father (who was a minister), that translated into my girlish brain as “be really good, or dad won’t love you”…and ultimately to thinking, “be really good, or God won’t love you.” A song that played over and over in my head was one from Sunday School, “Be careful little hands what you do…for the Father up above is looking down in love.” But, instead of believing God was looking down on me in love, I was terrified that my little hands weren’t being perfect!

The Lord slowly opened up the walls I had built around my heart as a child to transform me into a woman who could be more authentic and open. It has been a process, but started when I realized often when I introduced myself, it was in the context of stating who my parents were (they were fairly well-known in the circles in which I traveled) – even after I was living on my own. I was surprised to realize that my “position” in God’s family was mostly interpreted by me in the context of my position in my earthly family. I am thankful that realization led me on a journey of discovery.

It has been a process forgiving my loving parents and grandparents who only wanted what they thought was best … and opening up to God’s love – learning what God means when he says he sees and knows me is vastly different and kinder than my earliest interpretation. I now know how deeply I am loved and held – even with all my imperfections and when I mess up! My position in Christ is not based on what I do – but on his love for me! Psalm 139 has become one of my favorite passages of Scripture, and especially verses 17-18: “How precious are your thoughts about me, O God. They cannot be numbered! I can’t even count them; they outnumber the grains of sand! And when I wake up, you are still with me!” – Judi Brandow, Communications Specialist